Where did the month go? Suddenly it's almost Halloween, which seems to be getting more popular  in Japan, every year.

I've been thinking about a Kyoto post for a while - but Kyoto is overwhelming. I mean, there are so many fabulous specialties and there's a photo op around every corner. I will get to it soon! But in the meantime, I thought this Kyoto specialty was perfect for Halloween.


Kurogoma Yatsuhashi, or black sesame yatsuhashi is a kind of fashionable twist on the traditional Kyoto sweet. Like a lot of Japanese sweets, yatsuhashi is made with mochi rice flour. This type is "nama" or raw/ fresh yatsuhashi. You can also get a crunchy, cookie type versions.

The name means eight bridges and from what I can work out, it's based on the traditional eight plank bridges that lead viewers slowly through an iris garden. Baked yatsuhashi look just like little planks and perhaps herringbone pattern of the bridges also inspired the distinctive triangular sweets.

The mochi is usually flavoured with cinnamon ("nikki" in Japanese) and the filling is bean paste. But recently, a whole raft of other flavours have hit the market, to entice a younger customer. You can also get chocolate, matcha tea, sakura in spring and even choco banana for the many school kids who flock to Kyoto. But my favourite is black sesame, which is sweet but nutty (and I heard it achieves its strong colour from the addition of bamboo charcoal).

You can buy yatsuhashi all over Kyoto, but my favourite shop (which you'll also find all over Kyoto and at Kyoto station), is Otabe. They've been making these little treats for over 200 years. At the branch near Nishiki koji market (another must-visit in Kyoto), you can also make your own sweets in a little workshop above the shop. At Y600, it's about the same price as a box of yatsuhashi, but you have the satisfaction of making it yourself.

I am such a sucker for a pretty package.

At least, when it comes to omiyage, what's inside is usually pretty good, too. I've noticed quite a lot of omiyage packaging has gone kind of Taisho-era recently. I remember years ago in Sydney, I saw an exhibition called "Taisho Chic" or something. It was all about the Moga - Modern Girls - with Louise Brooks style bobs, who smoked cigarettes, went to cafes and listened to Jazz. Yes, Japan had flappers too. Like England's Edwardian era, Taisho was quite short (1912 - 1926), but it was a time of creativity and democracy, which unfortunately got taken over by militarism and... well, a lot of big problems that are still festering today.

Anyway, what's important here, is that it inspired some lovely Deco style design. Sometimes, you can still find examples Taisho-era architecture, though they're rare. Kawagoe has a nice mix of Meiji-style, Taisho and early Showa buildings. Tokyo's Imperial Hotel, by Frank Lloyd Wright, even survived (but was damaged in) the Great Kanto Earthquake of 1923 and WWII. Part of it has now been reassembled in Meiji Mura near Nagoya. I hope I can see it there one day. The Old Imperial Bar in Tokyo, while not original, is in the style of the time. I'm always on the lookout for Taisho-era or at least Taisho-style places. 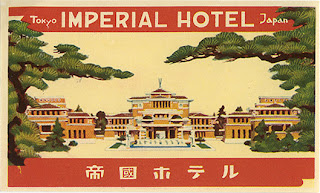 Ok, so on to the food! First up, Shiseido Parlour. Originally a soda fountain attached to the Shiseido Pharmacy in 1902, it became a cafe and purveyor of sweets and oddly, one of the first places to serve western-style dishes like croquettes (korroke). So it's 110 years old this year - as good an excuse as any to visit. The famous cinnabar red building in Ginza houses the sweets on the ground floor, and a cafe, restaurant and function spaces upstairs.

This is a limited edition for Autumn: chestnut flavoured cheese cake. The package is really lovely; a mix of gloss and matte black, and though you can't really see it in the photo, the chestnuts are printed in bronze. The use of the branches to frame the name reminds me of those Arts & Crafts style houses in California. Then inside, you get three miniature cheese cakes, which are really light and 'cakey'. Inside, you'll find smooth, sweet chestnut paste. The flavours work well together. They smell amazing, too - surprisingly 'home made'. They demand strong coffee. About 650Yen for 3 (you can get bigger boxes, but there's that temptation to eat them all and not share!)

Next, the beautiful simplicity of Higashiya. If you've been to the Higashiya cafe in Ginza (in the Pola Building), you'll know they make an art form of simplicity.

If you can't get to their cafe, try "Higashiyaman" in Aoyama - just around the corner from Issey Miyake - and you can get fresh sweets to take away. This tin, in black and white, mirrors the brand's logo. Inside, you'll find delicate, crispy rice treats called okoshi. These ones are flavoured with ginger. 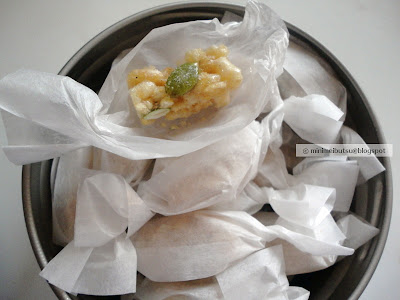 Next, we detour to Hokkaido on our packaging tour, and a little earlier - to the Meiji era. I had heard of the Sapporo Agricultural College before - apparently in the 1880s they had one of the most successful English programs, using language immersion. It became Hokkaido University in 1918, but the Agricultural part still functions as a faculty. And they make amazing cookies! These are light, crispy, buttery shortbread cookies. Well, actually, they don't make the cookies themselves. A Sapporo sweets company called Kinotoya make these "just like grandma's but fancier" cookies, for the university. They started making them in 2005, and inside the box, you'll find the phrase "Boys be ambitious" (nearly typed ambiguous, which might be more appropriate these days). It's the famous catch phrase of 1880s Hokkaido University professor Dr William Clark. It's nice to know that some of the profits from the cookies will go to the university's greenery program.

And finally, something quite new, but in the spirit of the era. This is another limited seasonal design, using a motif of ginko leaves. Wa.bi.sa is an offshoot of confectioner Yoku Moku (you have to visit their amazing "Blue Brick Lounge" in Aoyama - not just sweets! It's very ladies-who-lunch). Anyway, the company is famous for its light, European-style chocolates and biscuits. But what's interesting in a random way, is the name Yoku Moku comes from the Swedish town of Jokkmokk in northern Sweden. Wa.bi.sa (from wabisabi meaning refinement and simplicity in that very zen Japanese way), is their younger, funkier brand, combining traditional Japanese flavours with modern design. I like the transitions of colours on this package, with stylised ginko leaves. Inside, the cookies - a kind of 'karinto' or fried cookie - are green tea flavour and shaped like sakura flowers. 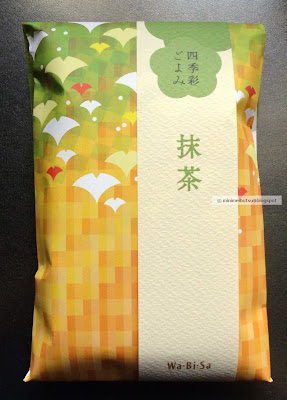 Meibutsu
I'm an Australian married to a surprisingly patient Japanese guy. We live in Saitama, which is more exciting than it's made out to be. I love packaging and food - I satisfy those two interests by collecting omiyage and meibutsu. Yes, I am one of those people who takes photos of their food.