We're experiencing "haru ichiban" today - the super strong, cold wind that whips through before spring. With a dry throat, I went in search of throat lozenges at the local drug store and found these lovely, retro fruit drops. 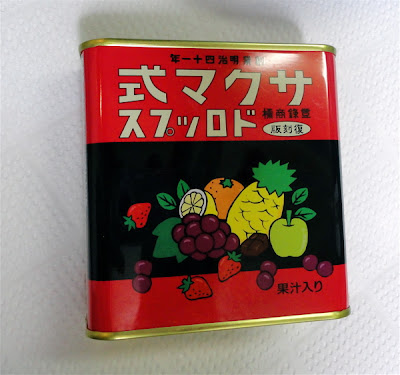 If you've seen the very beautiful, very sad Ghibli movie "Grave of the Fireflies", set during WWII, you'll recognise the tin: these are the hard fruit candies that the little girl Setsuko loves. Later, the tin plays a very significant part in the movie. I highly recommend the film, but you'll need a lot of tissues!

The company, Sakuma Seika, sometimes releases commemorative tins like this one. They've been making Sakuma Drops in Ikebukuro since 1908 so I think at just ¥100, it's an excellent souvenir of Tokyo!

The company's website (here) has some nice images of the history of the packaging design. The product itself has remained pretty much the same and it seems to be the only product Sakuma Seika makes. They're not so popular these days - with so many chocolate options and crazy flavours - but the sound of the candies rattling around in the tin must be very nostalgic for many people. I hope they continue to make them.

Email ThisBlogThis!Share to TwitterShare to FacebookShare to Pinterest
Labels: grave of the fireflies, hotaru no haka, ikebukuro omiyage, sakuma seika

I went back to my 'hometown' over Christmas and New Year. No matter how long you live in Japan, you'll always be asked where your hometown is. It's better than being asked "where you from?" by drunken businessmen (I once said "Saitama", which really confused the guy, then he said, "Oh, I'm from Fukuoka!" and maybe, he got the point that it's kind of rude to stand too close to random non-Japanese folks in elevators and yell questions at them. But he probably didn't.)

Anyway, we had a wonderful few weeks of sunshine and good food, and I did a lot of baking - something I can't do at home, as we have no oven. But at the end of the trip, the issue of omiyage came up. We usually spend our last day in Sydney running around the city, looking for the obligatory omiyage for family and co-workers.

Tim Tams are out, as you can easily buy them here at places like Plaza, Seijo Ishii and Kaldi. Vegemite is out as people think your playing a cruel trick on them (I buy it just for me. I have found it at Kinokuniya supermarket too, in case I run out).

We usually end up getting the usual chocolate-covered macadamias in nice boxes with koala pictures. The only problem is convincing people that macadamias are indeed native to Australia. Hawaii has done such a good job of marketing them as their own. A few years ago, we found delicious chocolates flavoured with native lemon myrtle, but they seem to have disappeared. 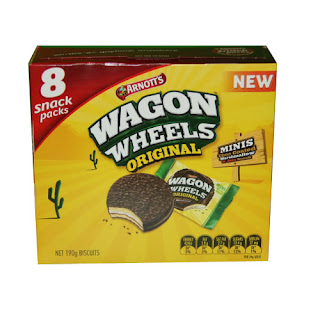 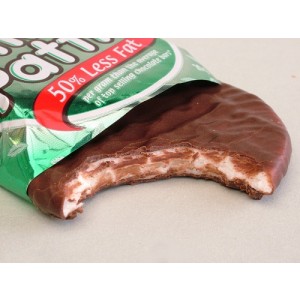 That leaves us with the cheap lollies of my childhood, which would be called "dagashi" in Japan. And so, we stock up on Wagon Wheels, Fry's Turkish Delight, Golden Roughs, Peppermint Patties, Pineapple Lumps, Cherry Ripes and Caramello Koalas. Some of these sweets actually come from New Zealand. Shhh! We often claim Kiwi products as our own. They can have Russell Crowe back, though.

But none of these sweets are "nice" enough to give as special gifts. I went to Haigh's Chocolates, in hopes of finding something "Australian" and beautifully packaged. I was a bit disappointed. They've become so expensive recently, and their packaging has gone very fashionable, but it doesn't reflect its heritage. For a company that started in 1915 in Adelaide, I would have hoped for some slightly Victorian Australiana, or at least some native animal shapes - didn't they once make chocolate bilbys? You can get the frogs, but they don't really register with Japanese friends as an Australian icon. Actually, looking at their website, they apparently have bilbys and murray cod, but when we went to their store in Sydney's QVB, we didn't find anything beyond very 'corporate' striped packaging.


I was actually keen to take tinned beetroot back, but after hubby tried it on a burger and then gave it all to me, I nixed that idea. I would have thought, given its similarity in taste to kabu and daikon, and the sweet, slightly pickled flavour, that it would be a good choice for Japanese friends, but apparently not. Meat pies would be a bit hard to transport... We tried kangaroo jerky once, but it didn't taste very good. I guess the 'problem' in a way, is that Australia has such a diverse culture, that when Japanese friends, who come from such a mono culture ask about "famous Australian food", after 'fish and chips' and 'meat pies', I'm kind of stumped. I always want to go to my favourite Vietnamese restaurant in Sydney, do yum cha with friends on a Sunday morning, or go out for a great pizza. I love that we have such a diverse food heritage, but it's impossible reduce it to a neat answer.

Not needing yet another stuffed koala and not wanting any faux 'Aboriginal' dot-painted ashtrays, we went to a Japanese Australian souvenir shop, where they had the kinds of omiyage that would be well-received: home-made macadamia cookies, local jams with indigenous fruits, King Island products, tea tree soaps, tote bags and hand towels with Ken Done designs, etc. The foods were packaged individually - something I always thought wasteful, but I can see that it makes handing them out at work much easier. The products were all made in Australia (even the plush animals), mostly by smaller companies with some kind of interesting back-story or unique product. I'm not saying these products were any better than what we could find elsewhere, but they understood what their customers wanted.


So I'm interested to know, if you're not from Japan, what are the omiyage of your home town?
Posted by Meibutsu at 7:55 PM 1 comment:

Meibutsu
I'm an Australian married to a surprisingly patient Japanese guy. We live in Saitama, which is more exciting than it's made out to be. I love packaging and food - I satisfy those two interests by collecting omiyage and meibutsu. Yes, I am one of those people who takes photos of their food.